Where I Dig Up Some Travel Journal Writing Because I’m JUST TOO BUSY to Blog, Pt. 1: Waiting for Marla in Chiang Mai 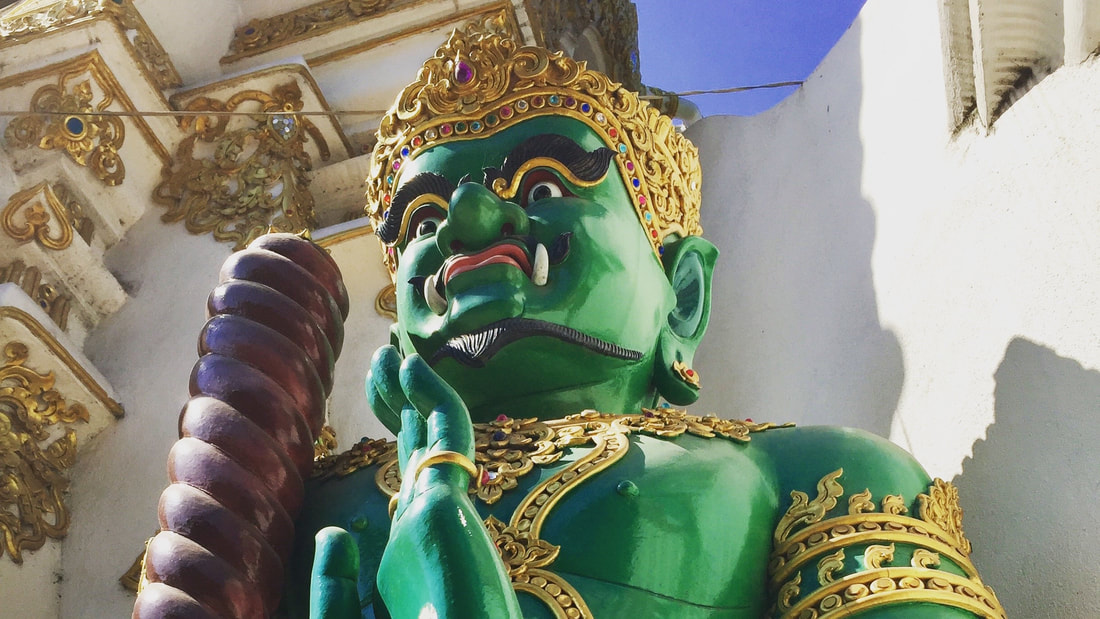 “I’m about to do something I really don’t want to do,” the man says, sipping his beer.
“Do tell,” I say, scanning the scant shelves for martini fixings.
In the preceding two weeks, I’ve learned that Thailand doesn’t do martinis, and in the preceding two minutes, I’ve decided that if an expat bar owned by a retired war correspondent didn’t know how to marry ice-cold gin and vermouth, I’d have to teach them.
“You see, there’s this—person—on her way over,” he continues.
I’ve only just sat down at the bar, and I’ve only just arrived in Chiang Mai, a one-hour flight north from Krabi. I was not prepared for the reality of the city: the scores of European and Australasian tourists crowding sidewalk-bereft roads; the open-air bars and restaurants piling on top of one another—mostly empty, containing three or four bored but attentive Thai girls to every one pale pensioner; the pair of rats that ran over the tops of my feet, running for their lives in the same way I did across streets of clamoring tuk-tuks, taxis, and motorbikes.
“I used to know her, oh, about ten years ago, when we partied in Bangkok. Wild parties. I guess you could say I’m pretty goddamn nervous about it.” The man laughs and takes a sip, then another. I have nothing yet to sip, and am distracted by this, but the man interests me nonetheless.

He is pale and wrinkled like the other old white dudes, but he doesn’t appear to be one of them. He’s American, for one thing, with a deep side part, dressed in a checked short-sleeved shirt and belted pants—reminding me a bit of my grandfather. It might also be the drawl. But his words don’t bounce and ricochet like my grandfather’s Tennessee hill twang; they bow low, languorous, even while his body twitches with anxiety. A Louisianan, maybe.
“I don’t really like her is the thing,” he says, square wire-rimmed glasses slipping down his nose. With one hand he pushes them back up and brings the bottle back to his mouth. He looks down at his phone. “You know, she’ll probably blow me off anyway. She’s already a half-hour late. Typical Marla.”
I finally catch the attention of the bartender, a lovely Thai woman who is at least fifty but perhaps seventy. Amenable to my delivering step-by-step instruction, she climbs a stepping stool and pulls down a dusty bottle of vermouth: fortified wine, the kind that doesn’t improve with age.
“So you fill a glass with ice—“
“See, look at this? This is what I’m talking about.” The message on the man’s cell phone is short, easy to read peripherally while keeping an eye on my emerging cocktail.
Darling! I just woke from a nap. SO SORRY.
“I mean I’ve already been here an hour! Is she coming or not?”
“Now you want to pour three fingers of gin—”
“Oh, geez. I’ll shut up. I’m sorry, I don’t know why I’m telling you all of this. I’m Larry, by the way,” he said.
“Don’t be sorry, Larry—yes, exactly, and a one-second pour of the vermouth—”
“I should just tell her not to come. This was a stupid idea in the first place. She’s a character. Just really too much. You may have heard of her, actually. Political royalty, you know. Well, sort of. Upper East Side Manhattan, daughter of a senator. We were part of this group together. She’s friends with the Dalai Lama, too. There’s your drink.”
There it is, indeed: the inaugural gin martini. I thankfully drink a mouthful and pull it to my bosom.
“Larry, were you in love with Marla?”
“What? No!”
“So, what? Is she blackmailing you? Why are you so nervous?”
Larry has an easy laugh and a fresh beer in his grip.
“Well, I’ll admit I might have been attracted to her. But there was never anything that happened between us. You’ll see. She’ll get here and you’ll see what I’m talking about. That is, if she actually comes. And if you stay, which I hope you’ll do.”

I’m alone in Thailand, which is unremarkable. I travel solo most of the time, which I enjoy in every aspect except for the ubiquitous response from men I meet along the way, who express disbelief that I would undertake such a dangerous activity, and offer unsolicited follow-up advice. One example: Upon arrival at JFK Airport after a month-long trip to Japan, the immigration official who stamped my passport decided to make some small talk: By yourself, huh? There’s no way I’d ever let my daughter go by herself all the way to Asia. I didn’t bother to inquire whether his daughter was a child, or if she were a woman in her thirties, as I was.
This trip was no exception. At a street stand in Bangkok, a couple approached me to consult on directions, then decided to stay for noodles and conversation. The man, a dreadlocked native of New Jersey asked about my plans: And you’re alone? In Asia?! Forreal? That’s not safe. You need to tell everyone you’re here with your husband. I looked at his traveling companion, a woman who was looking away from both of us, bowing her head and smirking. She met my eye then, but stayed silent.

We (I admit I am now past entertained; I am invested) continue waiting for Marla. Larry continues to fret.
“I’m an idiot for waiting here. Here I am with a beautiful woman who I could be taking out to dinner. I should be getting to know you, and instead I’m talking about Marla. How about it? Would you want to go get something to eat?”
Ugh, no, buddy. I’m your wingwoman. I demur. “No, Larry, my destiny is to drink this martini and keep you company until Marla arrives. I believe in you, Larry. You can do this.”
On cue, a rousing chorus of hurrahs rang from the front of the bar, as if to also cheer Larry on, but in fact, no: Marla had finally arrived.